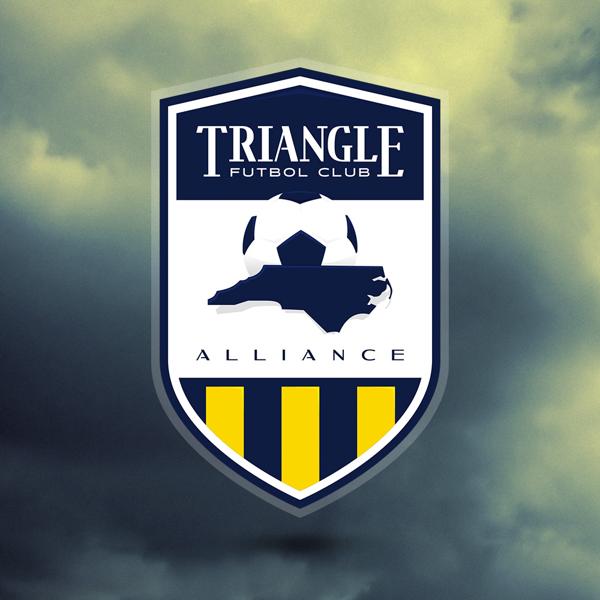 The list of Triangle Futbol Club Alliance (TFCA) Board of Directors (BOD) nominees was announced yesterday and by my estimation they all seem to be impressive candidates. There are four spots up for election on the board this year and so teams can vote for four of the six nominees. The one issue in this election which my wife and I are concerned about is the question of what type of surfaces the kids will play on. Given the current controversy around crumb-rubber and its possible link to cancer in soccer players, this an important issue.

Here’s a link to one of the latest articles on this issue: http://www.nbcnews.com/storyline/artificial-turf-debate/senators-ask-white-house-spearhead-study-crumb-rubber-turf-n501536

Soccer purists tend to prefer natural grass, but of course turf often becomes necessary when the grass fields are soggy. With the announcement that TFCA is partnering with the town of Apex to install new soccer facilities, I am curious what type of turf will be installed, and if it will include crumb-rubber fill made from recycled, ground up tires.

Personally, I wanted to know where each of the candidates stood on this issue prior to voting next week. I wrote a letter to ask them, and I wanted to share with other families / teams what I’ve learned.

As of now (Monday), I’ve received responses from all six nominees, here is a summary of each:

Based on the above responses, it’s my opinion that these six nominees are showing a thoughtful approach. It’s also encouraging when nominees show attentiveness to an issue that is important to constituents, and have taken the time to read, and respond to such a letter. I found all of the responses to be reasonable, and choosing the top four was not easy. I’m confident that my concerns have been heard, and the BOD will take the crumb-rubber turf issue seriously going forward.

Personally, I am most impressed by the responses from Shelley Blake, Will Wilson, Carolyn Nye and Dave Lehmkuhl. These are the four nominees I will support my team voting for. (note: Response from Dave Lehmkuhl was received on Sunday 1/31, and this article was edited on 2/1 to reflect his response and revise the list of four supported nominees)

Below is a quick overview of the controversy surrounding crumb-rubber infill, a short blurb about my family’s involvement with TFCA, and the full text of my letter to the BOD nominees. 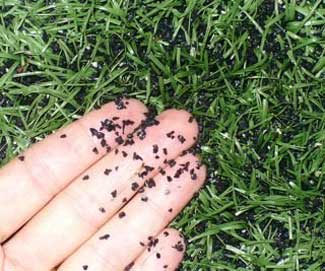 For years now, people in the soccer community have been raising questions about the safety of crumb-rubber coming from ground up tires. This is based on what seems to be an unusually high number of players (especially goalkeepers who have the most exposure) developing Leukemia and Lymphoma. Since there are carcinogenic (cancer-causing) chemicals contained in the tires, some wondered if this could be the reason so many goalkeepers were developing cancer. Of course the artificial turf industry executives dispute the idea of any correlation and point to studies which have shown no proven connection between crumb rubber exposure and cancer. A bi-partisan group of congressional leaders has asked the EPA to take a stand on the issue, which is something that the artificial turf companies also want. Currently, there is ongoing collaboration between the Center for Disease Control, the Consumer Product Safety Commission and the Environmental Protection Agency to examine the issue in greater detail and conclusively determine if playing on crumb-rubber surfaces creates an elevated health risk for players.

About me: My family has been involved in TFCA since last Spring and my son Nick has really enjoyed playing on the team. Nick tried out for both TFCA and CASL, but in the end we chose to join TFCA and have been very happy. In addition to having a great coach (Bobby Johnston), we’ve been glad to see that the boys mostly play on natural grass surfaces.

Full text of my letter to the TFCA BOD Nominees:

I am the father of an 8 year old player on the TFCA FAST CAM Navy team coached by Bobby Johnston. Thank you all for volunteering your services for the organization. I was very impressed by the variety and depth of experience you offer, I’m sure you would all do a great job.

But since we may only vote for 4 of you, I wanted to ask one question about your stance on a particular issue.

By now most of us have heard about the controversy surrounding the use of turf fields with crumb rubber fill (made from ground up tires). If you are not familiar, you can read an article here:

While this surface has become popular, some have become concerned by the apparent association between exposure to crumb rubber and the incidence of Leukemia and Lymphoma, especially for those players with the most turf contact (Goalkeepers).

I realize that it would be virtually impossible to prevent TFCA players from ever playing on crumb rubber turf surfaces, but do think the organization should seek to minimize the time the players spend on them. This would seem to be a prudent precaution at least until more scientific studies can be completed, and more answers become available.

What is your position on TFCA player exposure to crumb rubber turf fields? With the new agreement with the town of Apex to install turf fields, will you advocate for these to not include the type of crumb rubber that has become controversial?

I will appreciate any thoughts/opinions you can offer here.

Thanks and Kind Regards,

*The summaries of nominee responses were created by Derek V. DeShane for brevity and the wording is paraphrased. Please let me know if you would like to see the full text of each response.

This was from our first 3v3 tournament in Summer 2014.

Did my first Buzzfeed post. Obviously we are still trying to spread the word about the video. It’s a good cause, please check it out. 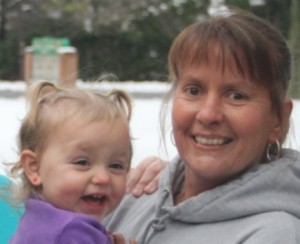 Above: Patti Coyne Powell with one of her kids

This is the video everyone is watching. Why are they watching it? Simple, Tim and Tina CoyneSmith have dedicated themselves to helping Tina’s sister Patti, who is going through a very difficult time.

Patti is living with incurable stage 4 lung cancer, she’s undergoing aggressive treatment, unable to work, and she is still there for her four kids, ages 2, 15, 18, and 19.

I created the video for a viral video contest at my company, Lenovo. Among other prizes, there was a cash grand prize of $50,000 advertised for the first entrant who could attain 500,000 views by the end of the contest, January 31st, 2015. I wanted my video to have broad appeal and so I got the cutest person I know, my son Nick, to star in it. He’s a big soccer fan and so we decided to feature him learning about his favorite player, Brazilian Neymar Jr. This allowed us to feature the convertible Yoga 2 Laptop PC, plus we used it when we shot the stop motion animated introduction as well.

The video was doing well and was in 1st place in the competition, but it was becoming clear that we had little chance of reaching the 500,000 view goal. Then on Wednesday January 7th I was having lunch with Tim CoyneSmith who pitched a new idea to me. He proposed that we try to drive more views by promoting it as a way to help Patti, his sister-in-law. By this point I was familiar with her story because he had told me about the difficult situation the family was in. Tim suggested we shoot for the 500,000 view goal with the idea that a portion of the $50,000 grand prize go to Patti. After discussing it with my wife, we decided that really we should just commit to giving the entire cash prize to Patti, in the event we could win.

From there we went to work on how to get the message out. My wife and I went to dinner at the CoyneSmith’s house, and over tacos, we aligned our messaging and marketing plans. Thankfully, Tim and Tina have impressively broad social networks they can tap. Friends, family, co-workers, cub-scouts, youth soccer, UNC Chapel Hill, the list goes on and on. The word has already spread so far that, much like some theories about the shape of the universe, the message is arching back toward us with people at our company hearing about it through some far-flung friend, and then talking to us about it. In addition to getting views, we are promoting Patti’s GiveForward page, and that’s brought in $1200 in direct donations since we kicked off the campaign for Patti, so that’s already a win right there as it’s enough to help her family pay rent and buy food for another month.

Tim and Tina have people all over the country watching the video and sharing it with their own networks. Now, there are some newspapers looking to pick up the story and the momentum just keeps building. We’ve been racking up views and especially in the last couple of days we’ve accelerated the pace even further.

So I just want to thank Tim and Tina for what they are doing, and giving me the chance to help Patti with my video. Tim has been a good friend to me as well as a professional colleague. His kids are close to Nick’s age, we talk all the time about youth soccer (he’s the reason we got into 3v3 tournaments), our families, our personal philosophies, comedy, you name it. It’s been cool to get to know the CoyneSmiths even better as a result of this experience.

Today is my birthday, and I could ask for nothing more than to be a part of something that could truly make a difference for Patti. Please if you’ve read this, as a birthday favor to me, share the video with your own network, be a part of this, to give is it’s own reward.

What else can I do to help?

Take two minutes to change a life by watching this video.

Question: Why should I watch this video?

Answer: Patti Coyne Powell, mother of 4, has incurable stage 4 lung cancer and can no longer work.  She cannot pay for food or rent. Watching and sharing this video could help win $50,000 for Patti.

Question: How can watching this video win $50,000 for Patti?

Question: What does this video have to do with Patti?

Answer: I made this video for the viral video contest. It’s gotten over 28,000 views already. We decided to try to make this into something truly meaningful by attempting to make this go viral and win the grand prize for Patti and her family.

What else can I do to help?

This is the team I coach, the FC Cary Barracudas, this is our third season as a team with many returning players. We are on the big field this year, with goalkeepers. In this game, Nick keeps goal in the first half and Ava in the second. They gave up only one goal between them. Conner started the scoring instantly, with later goals from Adarsh, and two from Nick. One of Nick’s goals was a free-kick and the other was an intercepted corner kick taken all the way up field for a goal. Click image to view video and see how this free-kick ends… 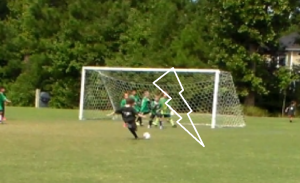 This is a clever idea, Ikea.